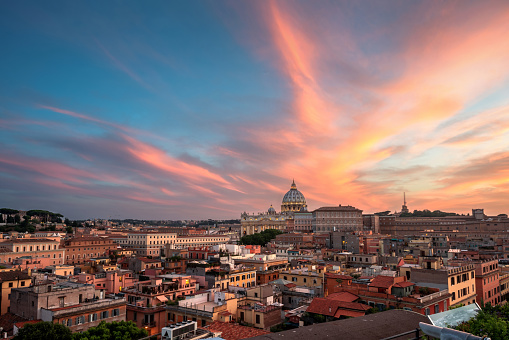 (Crux) ROME – When I first arrived in Rome as a cub reporter in the late 1990s, I met a kindly German priest who worked in the Vatican and asked him to tell me what he’d learned. In response, he launched into a story intended as a metaphor for his grudging acceptance of the Vatican’s legendary aversion to change.

It went like this: When he first arrived at his new job, he said, he was assigned an office with a nice view of St. Peter’s Square. When he tried to open his window one day, he discovered it had been painted shut. He asked around about why, and he discovered that no one currently working in his department knew – it had apparently happened a long time ago, before the living memory of anyone there.

My priest friend decided that “it’s always been that way” wasn’t a good enough reason to maintain the status quo, so he brought a hammer and chisel into work. He succeeded in getting rid of the paint and triumphantly forced the window open. Smiling at the memory, he said he thought he’d struck a blow for the spirit of the Second Vatican Council (1962-65), literally flinging open the windows of the Church to let in some fresh air.

He then went out for meetings, returning in the afternoon – whereupon, he discovered the logic for the closed window. Several pigeons drawn by the proximity to the square had made themselves at home on his desk, leaving distasteful reminders of their presence all over his office. It took the priest the rest of the day to clean things up, and from that point on, the window remained shut.

He used the story to illustrate that there’s often wisdom embedded in Vatican tradition, even when it’s not immediately evident, and said he’d learned to temper his instinctive zeal for change with a healthy respect for the past.

That outlook tends to be a characteristic feature of Vatican culture, and there’s much to be said for it. The shadow side of that instinct, however, is that respect for the past can sometimes impede any change at all in the present, even when it’s badly needed.

Soon enough, we’ll find out if a fear of pigeons gets in the way of progress on the clerical sexual abuse scandals, as this Thursday Pope Francis will open a keenly-anticipated summit of presidents of bishops’ conferences from around the world and other top Church officials.

Vatican officials and even the pope himself have tried to lower expectations for the event, warning that it’s just a start and that three days in Rome aren’t going to change the world. In a recent interview with Crux, Maltese Archbishop Charles Scicluna, a former Vatican prosecutor for sex abuse crimes, insisted that “this meeting is not going to be a three-day wonder, solving every problem we have in the book.”

Here’s the thing, however: Perhaps this summit can’t deliver everything, but from the point of view of public perceptions of Francis and the Church, it had damn well better deliver something.

All it takes is a few moments with survivors of abuse to make that clear.

“Speaking as a victim myself as a child by a priest, it’s emotional to be here,” said Peter Isely, a co-founder of the Ending Clergy Abuse activist group, speaking to Crux Saturday night. Isely is part of a delegation of survivors and activists who’ll be on hand in Rome throughout the summit, offering daily commentary shortly after the Vatican’s own briefing ends.

Isely said that while he welcomes the McCarrick verdict, he sees punishment for clerical abuse as only half the battle.

“[Such behaviors] are only happening, and can continue to happen, because of covering up those crimes,” he said. “Until there’s accountability, until people see bishops and cardinals who have been demonstrated to have covered up these crimes and let children be harmed suffer consequences and punishment, this is never going to be resolved.”

“Anything can happen, but this is an opportunity when that can finally be stated,” he said.

Up to this point, most reformers and experts have treated accountability for the cover-up as well as the crime as the end game of the process, arguably the most complicated and messy aspect of reform and hence something that can be put off while more easily obtainable objectives are pursued, such as cajoling recalcitrant bishops’ conferences in the developing world into finally adopting guidelines for the safeguarding of minors.

What experience has taught, however, is that such guidelines are only as valuable as the will to abide by them, which brings us back by a short path to accountability for those to whom such policies apply – i.e., bishops and other senior managers.

Of course, it’s unrealistic to expect a heterogeneous assembly of prelates, some of whom hail from local churches with deep experience of the abuse crisis and others from places where denial is still widespread, to design and agree upon an accountability mechanism for themselves in three days.

However, it’s important to note that’s not actually what Isely requested. He asked only that such an outcome be “stated,” meaning he’s hoping for a clear statement of purpose that the Catholic Church must adopt, and implement, the same stern accountability for the cover-up of clerical abuse that it now has, at least in theory, for the crime itself.

If the summit opening Thursday delivers such a result, it’ll likely be hailed as a success. If not – well, roosting pigeons will be the least of the pope’s worries.