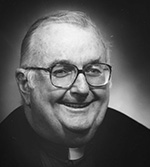 Father Anthony V. Brennan, M.M., a native of  Brooklyn, died in Vancouver, British Columbia, on May 19. He was 80 years old and a Maryknoll priest for 53 years.

Born in Brooklyn, New York, he was raised in Manhattan.

After ordination on June 10, 1961, he was assigned to Hong Kong to study Cantonese.  In 1968, he became pastor of a new parish, St. John’s in Kwun Tong.  He also served as pastor of St. Peter’s parish and Christ the Worker parish.

He remained in Hong Kong for most of his missionary career, which included an appointment as second regional assistant and director of the Maryknoll house in Stanley. He became interested in the Marriage Encounter movement and worked with the Marriage Advisory Council, an inter-parish program in Hong Kong.  In addition to his other duties, Father Brennan visited patients at the United Christian Hospital in Hong Kong twice a week.

From 1990 to 1994, he served in the Maryknoll development department in Ossining, ministered to parishioners at Transfiguration parish in Manhattan’s Chinatown. He returned to Hong Kong to retire in 2001, but he continued his pastoral work in Christ the Worker parish.

He is survived by his sisters Mary Del Duca of Port St. Lucie, Florida, and Ann Pirozzi of Myrtle Beach, South Carolina, and brothers Charles Brennan of Staten Island; Peter Brennan of Manalapan, N.J.; and Francis Brennan of Atlantic City, N.J. Burial was in the Maryknoll Society Cemetery.