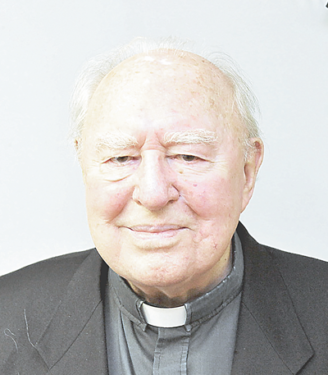 Father Joseph M. Nolan, a retired priest of the Diocese of Brooklyn who had served as pastor of Sacred Heart Parish, Cambria Heights, for 21 years, died on Aug. 31 at the Bishop Mugavero Residence in Douglaston. He was 97.

A vigil Mass for Father Nolan was offered at Sacred Heart on Sept. 5. His funeral Mass was celebrated at the Immaculate Conception Center, Douglaston, on Sept. 6.

Both Masses were celebrated by Auxiliary Bishop Guy Sansaricq. Father George Cowan, a retired priest of the diocese, was the homilist at the funeral Mass.

“He had a very rough voice,” Father Cowan said of his longtime friend in an interview with The Tablet. “But once you got to know him, he was a marshmallow inside. He was a gentle, gentle caring man.”

In addition, he was chaplain of the Young Christian Workers for Kings County and a member of the diocesan priests’ Senate.

His burial was at Holy Cross Cemetery, Flatbush.