WASHINGTON, D.C. – In the thick of the clergy sex abuse crisis, thousands of American Catholics descended on the nation’s capitol in protest of abortion where Archbishop Joseph Naumann reminded them that the abuse of minors is antithetical to the Church’s pro-life witness.

“For all Catholics, the last several months have been profoundly difficult,” he said. “We have been devastated by the scandal of sexual misconduct by clergy and of past instances of the failure of bishops to respond with compassion to victims of abuse and to protect adequately the members of their flock.”

“The abuse of children or minors upends the pro-life ethic because it is a grave injustice and an egregious offense against the dignity of the human person,” Archbishop Naumann continued. “Moreover, the failure to respond effectively to the abuse crisis undermines every other ministry within the Church.”

Archbishop Naumann’s remarks came Thursday evening, Jan. 17,  at the National Prayer Vigil for Life, which occurs each year on the eve of the March for Life, an annual event in protest of the Supreme Court’s decision in Roe v. Wade that legalized abortion throughout the United States.

This marks Archbishop Nuamann’s inaugural year as head of the United States Conference of Catholic Bishops’ (USCCB) pro-life committee, and, as is custom for that position, he served as principal celebrant and homilist for the Mass.

Archbishop Naumann is the archbishop of Kansas City, Kansas, and a long-time member of the USCCB pro-life committee. He was elected to his post in 2017, and in November 2018 he replaced outgoing chairman Cardinal Timothy Dolan of New York.

The archbishop opened his homily by recalling the twin cases of Roe v. Wadeand Doe v. Bolton, which he said were cases “based on deception.”

“The claim of the Supreme Court that the United States Constitution contains a right to abortion is absurd,” he posited.

Forty-six years after those decisions, Archbishop Naumann observed that there is some “new hope” due to changes at the Supreme Court, suggesting there may be a “re-examination and an admission by the court of its tragic error.”

Last October, Justice Brett Kavanaugh was confirmed to the Court after a contentious Senate confirmation battle, replacing retiring Justice Anthony Kennedy, who was considered the Court’s swing vote, particularly on issues of abortion. Many pro-life groups supported Kavanaugh’s nomination believing that he will help deliver on President Donald Trump’s campaign pledge to nominate a pro-life justice.

Yet despite this newfound optimism, Archbishop Naumann warned that the recent “ferocity” which led the questioning of a judicial nominee by two members of the Senate over membership in the Knights of Columbus has led to a rise an anti-Catholic bias that, he said, should be cause for concern.

(The Knights of Columbus are a principal sponsor of Crux.) 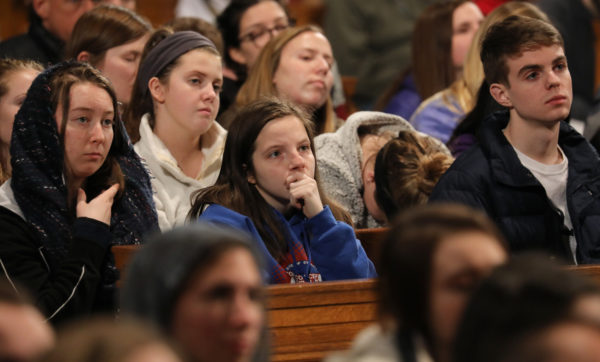 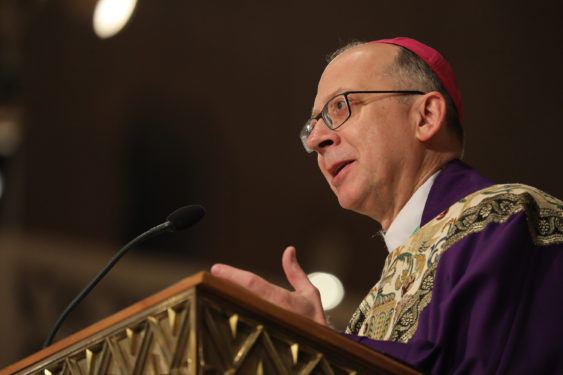 Archbishop Naumann also pushed back against the notion that pro-life advocates are only concerned about the unborn child and not their mothers or other members of society, while also defending the priority given to protecting life at its beginning stages.

“The pro-life ethic challenges us to care about the sacredness of every human being throughout the life spectrum. We are called always and everywhere to promote the dignity of the human person,” he said. “Protecting the life of the unborn children is the pre-eminent human rights issue of our time, not only because of the sheer magnitude of the numbers, but because abortion attacks the sanctuary of life, the family.”

“We are concerned about the life and dignity of the human person wherever it is threatened or diminished,” Archbishop Naumann said. “We care about those harmed by economic poverty, by racism, by religious intolerance. We care about the plight of the refugee fleeing persecution and the immigrant seeking a better life for his or her family, of victims of violent crime as well as those imprisoned, of those with intellectual or physical disabilities and the frail elderly, of violence and disrespect against those in law enforcement as well as the victims of police brutality.”

“Anyone whose life is threatened and anyone whose human dignity is disrespected have a claim on our hearts,” he said.

In casting his vision for pro-life engagement, Archbishop Naumann challenged that “our pro-life ministry is about mercy,” – a ministry that extends mercy to the children in the womb, mothers of unborn children, post-abortive mothers or fathers, abortion advocates, and abortion clinic workers and volunteers, and “mercy for those who wish to disqualify from public office members of the Knight of Columbus or anyone else in whom ‘the dogma lives loudly,’” – a nod to the questioning of Judge Amy Coney Barrett by Senator Diane Feinstein, who vigorously questioned Barrett’s commitment to Catholic dogma.

Concluding his remarks, Archbishop Naumann called for gratitude for “pro-life Pauls,” – a reference to the Apostle Paul, who was once a persecutor of Christians before converting and becoming one of the Church’s most well-known missionaries – saying that the long-history of converts of once-ardent abortion advocates to the pro-life cause should provide the movement with hope to continue in their work.

The annual vigil always brings together an impressive number of prelates and priests, with nearly 40 bishops and over 250 priests joining in the 15-minute procession at the start of the Mass, which took place at the Basilica of the National Shrine of the Immaculate Conception in the nation’s capital.

French Archbishop Christophe Pierre, the apostolic nuncio to the U.S., was also on hand for the occasion.

While the event is normally concelebrated by a majority of the residential U.S. cardinals, this year only Cardinals Daniel DiNardo of Galveston-Houston and Sean O’Malley of Boston were in attendance – a fact many viewed as representative of the hierarchy’s ongoing challenges in responding to the fallout from the clerical sex abuse crisis.

Last year’s vigil marked one of the final public appearances of now ex-Cardinal Theodore McCarrick whose revelations of sexual abuse marked the beginning of the current round of the U.S. clergy abuse crisis.

In 1979, Maryknoll Brother Goretti Zill from New York planned the first prayer vigil before the March for Life. Since then, the National Prayer Vigil has gone on to become one of the most well-attended Catholic events organized around the march.

The prayer vigil will continue throughout Thursday night with Eucharistic Adoration, rosary, and confession, and through Friday, Jan. 18, with benediction and Morning Prayer.

The official activities of the March for Life begins Jan. 18 with a noontime rally on the National Mall, followed by a march up Constitution Avenue to the steps of the United States Supreme Court.